This year, I am in charge of putting together the 2009 Carney Family Calendar, and as such I have been collecting pictures of all the extended family for the photo collages. This made me realize that Mark and I had almost no pictures that were less than a year old. Also we had almost no pictures of us together that were less than about three years old. So off we went up Rock Canyon with our broken camera in the hopes of taking some pictures. Now our camera's screen is broken and we soon discovered that it is very difficult to take a picture with no screen, and without a viewfinder. So we just took a whole bunch of shots in the hopes that at least a few would not have our heads chopped off. Also, we were pet sitting my parents' dog bear, so the picture taker was also holding two leashes while we tried to get a good picture. Even with all those challenges though, I think we got a few fun ones.

Here's Mark being drug down the trail by Mazie... 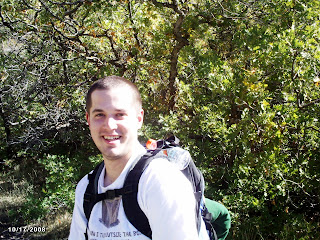 We tried a few with the camera timer, but this is the only one that even slightly turned out 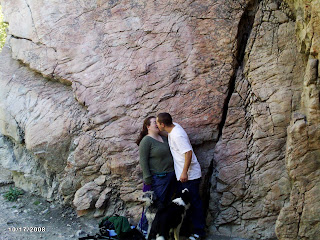 Surpriseingly, we managed to get one of Mazie in between her hiding from the camera. 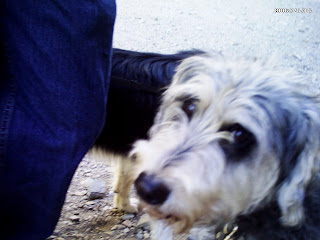 We walked back down as the sun was just barely starting to set and had a great view of the lake..far off in the distance. 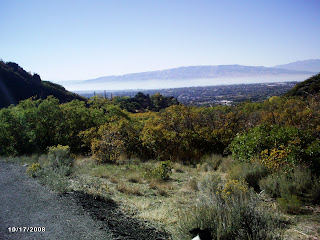 It's that time of year again....Autumn!! So now that October is in full stream we decided to take the time to partake in some of the the traditional Utah fall favorites. We packed up the car with my baby brothers and headed to Hee Haw Farms. While there we had a blast enjoying a 25" slide, a corn maze, pony rides, pig chases and much more!

This first picture is of Robert and Christopher after taking a hay ride out to the pumpkin patch in order to pick their own pumpkin. I made the rule that they had to be able to carry their own pumpkin because they were drawn to the ones bigger than they are! This picture is of all three boys heading down the slide..this is probably the thing that we did most! 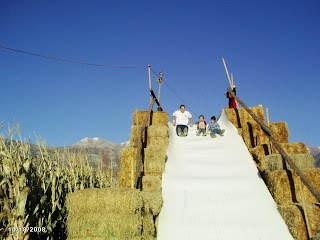 When we saw these cutouts, we couldn't resist a few shots! 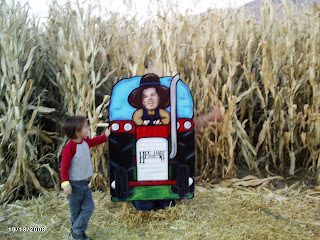 okay, I have to say that I am DEFINITELY not someone that gets involved politically. I just don't. Most of the time I feel as though I do not understand enough of the issues at hand to make a competent decision. However, there is one topic that I feel like I know enough about to make intelligent statements. The sex offender registry. As a victim of sexual abuse myself, my initial reaction is to sing the registry's praises. I mean it protects people right? Yet, with any great controversial issue there is a dark side hidden behind the golden armor of the registry. Labels. Stereotypes. Tell me, what do YOU think of when you read the words "sex offender registry"? Do you think of pedophiles, rapists, and general scum of society? Or do you think of someone that made a mistake and is paying the price?
The problem with the registry, especially here in Utah, is the fact that there is no description of the crime committed available on the list. That list does indeed include people that are pedophiles and rapists...and the survivor in me screams "burn, baby, burn" when it comes to what they go through. Yet what about the person charged with indecent exposure, Do they deserve ten whole years on the registry? Ten years of not being able to have a decent place to live, of not taking their kids to a park, of not having a good job? What about the person that had consensual sex with a minor truly believing the minor was of age? The person that pursued a coworker too much and grabbed a derriere? All of these things can be registrable offenses. Yet ALL of them have the same punishment, ten years on the registry.
I have a good friend who will remain nameless for his protection, (you know who you are) that was charged with a crime he did not commit. He went through FIVE years of legal battles, FIVE years of being unable to provide for his family, Five years of harassment, and shame. In the end, he chose to stop fighting. He sacrificed his integrity and accepted a plea bargain for a crime he did not commit so that he could be home with his wife and five children. He will spend the next ten years on the sex offenders registry for a crime he did not commit because he loved his family enough to sacrifice himself. Is he who you think of when you think about the sex offender registry? Today I sit quietly and watch someone else I love go through a very similar thing and I have to ask myself...who is this protecting?
Honestly, how many of you surf the registry to ensure you, and your family are not exposed to someone on the registry? I don't. It's not something that I would ever think of. And even if I did, why should I have that right? And why only for sex offenders? Why not for murderers, thieves and con artists? Did you know murderers can spend less time on jail and on probation than sex offenders (depending on the offense)? Let the punishment fit the crime. The registry not only impacts the offenders life but that of the offenders family. They live with the stereotypes and the fear.
It's time for a change. The people need protected, and not just the one's who don't love a sex offender. It's time for the punishment to fit the crime, for the sex offenders registry to undergo a major transformation. I just haven't figured out how.......
Posted by Mark and Amy at 7:49 PM No comments: